Finding a Suitable Vehicle For My Dog Walking Business 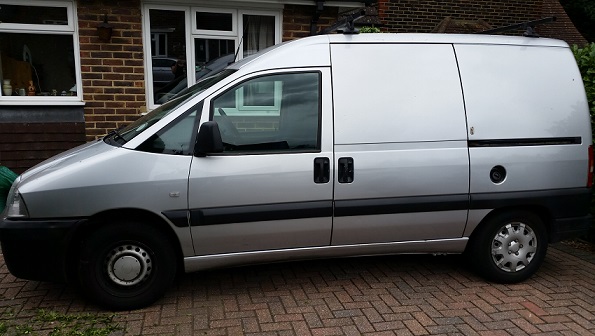 Since making the decision of starting up this business, I realised I’d need to find a decent sized van to be able to transport pets to their walks, my house or appointments they have. I also know that if I’m going to be walking numerous dogs, the van would need to be big enough for a few crates to keep dogs safe while in transit.

It’s usually a lot easier to transport cats and smaller caged pets as you can put the seat belt around the cage or carrier. Dogs, however, could easily clamber all over the van or me if they aren’t properly restrained while I’m driving. I do use harnesses, but some dogs do not like wearing them so a van that fits a few cages would be perfect!

It took me a while and a lot of searching on Google and Autotrader to find what I was looking for – a Fiat Scudo. This was big enough for two or three dog cages, but small enough for me to feel comfortable driving in. I did learn that there were three types of van that were essentially the same; the Fiat Scudo, Peugeot Expert and Citroen Dispatch. This made my search a lot easier as I had three vans to look for rather than one. It also gave me more choice in terms of colour and price. I particularly liked Silver instead of White.

I wanted to get a good deal and not spend too much, but also wanted to make sure the van looked good and that it drove well. Most importantly that it worked too!!

Finally, I narrowed it down to a few that I thought were pretty good and a reasonable price. I’d found two White Fiat Scudo’s and one Silver Peugeot Expert. Naturally, the Peugeot was my favourite as it was the colour I wanted, but I was aware that I couldn’t just rely on this!

Unfortunately by the time I’d seen the Fiat Scudo’s and spoken to the dealer about them, they had been sold.

This left my favourite one, which I was secretly pleased about, but also concerned that it might have sold too. It was also advertised on Gumtree by a private seller and if I’m honest, I wasn’t too sure they were a trusted source.

So my boyfriend, Bryan, and I set off to have a look at it, hoping it would be a great deal but also wondering if we were wasting our time. We got there and met a nice old chap, who had been using the van for his decorating business so it had a few paint marks and age related things like a stiff door, but in was in pretty good condition.

Luckily for me, Bryan is a mechanic so he had a look at the engine which seemed fine for the van’s age. Then I took it for a test drive. Now, not having driven a diesel before it was a bit of a shock to the system and I didn’t realise you had to turn the key, wait for one of the lights to go off showing it’s warmed up, and then start it up! Bryan told me off as I did it wrong two or three times. He never actually explained to me until we’d left! It drove pretty well and I only stalled once which I was very proud about!

In the end, after thinking it over for the day, I ended up buying the van and am very happy with it so far.

So if you’re ever searching for a van or other vehicle to help your business along, be open about where you get it from. Dealers are great as you can trust them a bit more and often get a warranty, but don’t rule out buying privately. As I’ve found out, sometimes you can get a great deal from a private seller!

For All Your Pet Care Needs

We use cookies on our website to give you the most relevant experience by remembering your preferences and repeat visits. By clicking “Accept All”, you consent to the use of ALL the cookies. However, you may visit "Cookie Settings" to provide a controlled consent.
Cookie SettingsAccept All
Manage consent

This website uses cookies to improve your experience while you navigate through the website. Out of these, the cookies that are categorized as necessary are stored on your browser as they are essential for the working of basic functionalities of the website. We also use third-party cookies that help us analyze and understand how you use this website. These cookies will be stored in your browser only with your consent. You also have the option to opt-out of these cookies. But opting out of some of these cookies may affect your browsing experience.
Necessary Always Enabled
Necessary cookies are absolutely essential for the website to function properly. These cookies ensure basic functionalities and security features of the website, anonymously.
Functional
Functional cookies help to perform certain functionalities like sharing the content of the website on social media platforms, collect feedbacks, and other third-party features.
Performance
Performance cookies are used to understand and analyze the key performance indexes of the website which helps in delivering a better user experience for the visitors.
Analytics
Analytical cookies are used to understand how visitors interact with the website. These cookies help provide information on metrics the number of visitors, bounce rate, traffic source, etc.
Advertisement
Advertisement cookies are used to provide visitors with relevant ads and marketing campaigns. These cookies track visitors across websites and collect information to provide customized ads.
Others
Other uncategorized cookies are those that are being analyzed and have not been classified into a category as yet.
SAVE & ACCEPT